skip to main | skip to sidebar

Over the past nine months, life has been very hectic and hence the lack of blogs and feltmaking. I have however, been able to make just a few little vessels, very simple, and a handbag or two, plus a pair of slippers. Not much when you consider that I was very productive in that area a while ago. But that is what happens when one gets caught up with working and finding new adventures to go on.

Recently, the passing of a very special person occurred. I admired her very much and was getting to know her as much as I could. But time would not allow that, and the cancer that she had was taking hold in such a way that it would not leave her. I will miss her, as I know that other special people will also. Rest in Peace, Irene.

A couple of trips overseas came and went again in the time that has elapsed since I recorded a blog last. I have now seen New Zealand in all the seasons. One thing that I can say about that country is that it is so GREEN.

Also since the last time, I have had to invest in a new computer. My old faithful bit the dust just over 6 weeks ago and I am still getting used to this one. I have a lot of things on the old one that I have yet to extract onto a new hard disk drive, but not being too technical about these matters, I have not been able to access them yet. Photos, letters, addresses, movies and music are all lost to me in the meantime.

Time will heal that though, as I am determined to do it.

In the meantime, because the winter is coming in, I need to have some inspiration to do more feltmaking. Time to browse my books and magazines, methinks.

Until next time
Keep on felting

Julie
Posted by jaruleeli at 11:20 PM

Hi I just found your blog. Yay! Another felter in the area. I'm down at Dunsborough, behinds Happs. I find textile artists are a little thin on the ground around here, so its nice to know I'm not alone! Julie 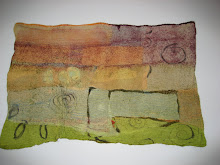